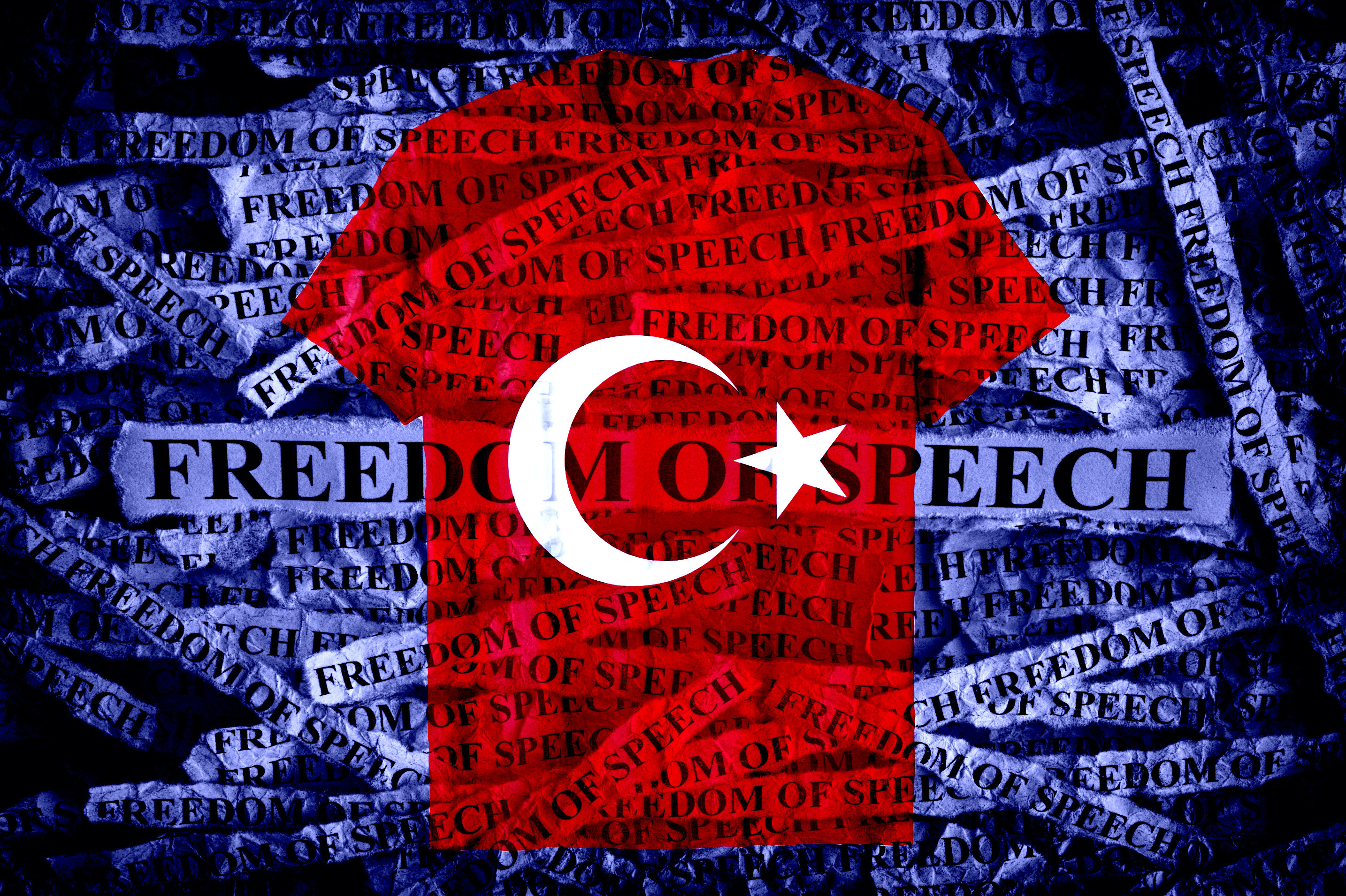 “You can imprison me but you cannot keep me here [….] because, like all writers, I have magic. I can pass through your walls with ease”[1]. With these words, the Turkish journalist and author Ahmet Altan declares the power of the written word that is capable of carrying on the voice of dissent, also in a hostile environment. Exactly, the jail did not turn off his voice and the famous Turkish writer published last year a new book entitled: “I will never see the world again”, a clear manifesto of the importance of the written word: when there is no (and never will be) perspective of physical freedom, writing becomes an essential expression of human dignity because it gives the man the possibility of living through the power of his ideas that never could be jailed.

Ahmet Altan has been in prison since September 2016, sentenced to life on charges of abetting the failed military coup through subliminal messages (he affirmed that the policies perpetuated by  Erdoğan were the same that had lead to the other Turkish coups). He is only one of the victims of the repressive state apparatus set up by Recep Tayyip Erdoğan in the last three years.

According to Freedom House in its last Turkey Country Report[2],  the AKP government showed a growing contempt for political rights and civil liberties, and its authoritarian nature has been fully consolidated since the 2016 coup attempt. Moreover, with the adoption of the constitutional changes in 2017, that shifted Turkey  from a semi-presidential system to a presidential one, Erdoğan’s control is unrestricted and it has become more difficult (or even impossible) to make a real political and civil opposition.

The Committee to Protect Journalist[3] (CPJ) estimates that Turkey is the world’s worst jailer of journalists for the third year in a row, followed by China and Egypt. The European Federation of Journalists in its last monitoring updated to February 2019, show us a terrifying number: 157 jailed journalists[4].

Their only fault, their crime? They had (and have) the courage of pursuing an intellectual battle against the abuses of the power lead by Erdoğan’s government  and its efforts of degrading  the human dignity of civilians.

In this regard, the Memorandum on freedom of expression and media freedom[5], drafted by the Commissioner for Human Rights of the Council of Europe after the coup attempt occurred in the country is noteworthy. Namely, the Commissioner stresses a progressive deterioration of the current situation regarding freedom of expression in Turkey through several indicators linked to the following issues: media pluralism and independence, safety and security of journalists, juridical harassment and last but not least, internet censorship.

The international law reference concerning the freedom of expression in Europe is the European Convention on the Human Rights (ECHR) that in article 10, co. 1 declares[6]: “Everyone has the right to freedom of expression. This right shall include freedom to hold opinions and to receive and impart information and ideas without interference by public authority and regardless of frontiers [...]”. By contrast, in co.2 it is expressly stated that: “ The exercise of these freedoms […] may be subject to such formalities, conditions, restrictions or penalties as are prescribed by law and are necessary in a democratic society, in the interests of national security, territorial integrity or public safety, for the prevention of disorder or crime, for the protection of health or morals […]”. The safety of sovereignty above all else! This is the card played by the AKP government in order to justify its repressive actions against media outlets and journalists not sympathizing and not aligned with the current political environment: dissent and criticism are perceived by the authorities as a threat to the integrity and interests of the State.

In the Turkish political and juridical language of the last 5 years we can notice, in everything related to freedom of expression[7], an abuse of the concept of “incitement to violence” and the legal framework itself, notably the interpretation and the application of the Turkish Criminal Code and the Anti-Terrorism Act, is instrumentalized by the government and  by the corrupt prosecutors and judges in order to bring down one of the core issue for the functioning of a democratic society: the plurality of the voices.

Two are the main consequences: on one side we witness the compression of the media landscape and the practice of self-censorship, as well as a direct consequence of an environment signed by terror and mutual mistrust. Thus, the main and most dramatic consequences of these violations are, on one hand, the progressive erosion of public opinion and, on the other, the denial of accurate and transparent information.

Using the 2016 Venice Commission’s report [8] (European Commission for Democracy through Law) as reference, it is possible to observe how certain article of the Penal Code – such as article 216 (sanction against public incitement to hatred or hostility), number 299 (criminalisation of insults against the President of the Republic) and 301 (criminalisation of any form of degradation of the Turkish Nation or of the organs and institutions of the State) – are being used now, more than ever, as the legal basis for the silencing, persecution and imprisonment of journalists, writers and human rights defenders.

This trend is well highlighted by the Erol Önderoğlu case[9]. In 2016, the representative of Reporters Without Borders in Turkey was charged with promoting terrorist propaganda and inciting crime because he had been symbolically the editor for the Kurdish newspaper Özgür Gündem (forcibly closed in August of the same year), for the purpose of defending media pluralism. Exceptionally acquitted by this first charge, in the second trial started this year, Önderoğlu is again accused of terrorist propaganda (with 16 other activists) for expressing his solidarity with  the academics prosecuted because of a peace petition.

Again, another meaningful example that shows us how much the juridical framework is instrumentalized, concerns the Hüsnü Mahalli’s vicissitude. Hüsnü Mahalli is a Syrian born journalist, who acquired Turkish citizenship in 2011. He has been arrested on the morning of December 12, 2016, (after a police raid), on charges of openly insulting the Republic of Turkey and its president, calling him “a dictator”, due to his critical comments about the Turkish government’s foreign policy in Syria[10]. In 2018, after two intensive years of trial,  the 29-month prison sentence[11]has been suspended.

A wide range of journalists, academics, opinionists and cartoon satirists in recent years have been charged with the crimes pertaining to the Penal Code aforementioned, without any real and legal proof of attempting to threaten the State’s security and respect.

The Memorandum on freedom of expression and media freedom mentioned above, also notes that pressure on journalists (and consequently their perspective to live and work in a safe environment) is not limited to Turkish ones: a wide number of foreign correspondents is in the government’s target as well. Regarding this subject, the Stockholm Centre of Freedom (SCF) outlines the situation as a real clampdown on foreign journalists in the country.

The advocacy organisation stresses how it is difficult for foreign journalists to work in a context increasingly characterized by xenophobic attitudes. From one hand, potential sources avoid to talk with them for fear of being labeled as traitors or collaborators (for instances, street interviews have become more difficult) and from the other hand, the government itself prevents foreign journalists from accessing all the data and information that are essentials for verifying their inquiries.

Furthermore, in the last years foreign journalists have also been subject to detention and jailing. Moreover, there have been cases of denial of residence permit extensions, cancelation of accreditation, deportation, and prohibition to enter Turkey and (most dramatic), cases of death under suspicious circumstances[12].

This last one is the tragic fate of Orouba Barakat, a Syrian opposition activist, and her 22-year-old journalist daughter Halla Barakat, a US citizen. They were found dead on September 22, 2017, in their apartment in Istanbul. The two women were both active in the Syrian refugee community in Turkey and they are known for their long opposition to Bashar al-Assad and his father Hafez al-Assad. Hala Barakat had also worked for the Turkish Radio and Television[13].

Finally, the charge of incitement to violence and terrorism has affected foreign journalism as well. Such is the case of the Istanbul-based French journalist for National Geographic Mathias Depardon, accused of disseminating terrorist propaganda[14], possibly due to his photos of members of the banned Kurdistan Workers’ Party (PKK) which had been published in French media outlets. He was detained on May 8th, 2017 in the south-eastern province of Turkey on the border with Syria. It was only after the direct intervention by French President Emmanuel Macron that the photographer was released and repatriated to French territory (in June 2017).

Turkish Western allies are aware of the physical and psychological violence inflicted by the AKP’s government upon national and foreign journalists in Turkish prisons. Furthermore, NGOs and international bodies are leading awareness-raising activities to mobilize western societies as well as political elites.

Most recently, the statement presented by the Press Emblem Campaign’s statement (a non-governmental organization with a  consultative status at the United Nations) during the session of the United Nations Human Rights Council in Geneva held in March on the issue of press freedom and the number of journalists killed last year in Turkey is indicative: 117 journalists were killed in 2019, an increase of 17 percent if  compared to the previous year[15].

The situation is gradually getting worse. And so? What are Western democracies doing? For now, they seem to be watching impassively as the Turkish censorship regime is further empowered by the attempted coup in 2016 – which Freedom House reports has led to the closing of more than 150 media outlets[16]. By contrast, independent newspapers and websites that continue to operate are fighting every day against a hostile and oppressive environment with the constant risk of their staff being put in jail without any real charge. And yet, Western countries notice from a distance the “daily routine” of  juridical harassment against oppositional Turkish journalism: the night-time police raids, the excessive use of detention, the defective reasoning in the courts’ detention decisions, in one word: the breaking of the  rule of law.

The threat of persecution and the fear of no longer seeing the light seems to be a daily reality in today’s Turkey. But the strength of the impassioned seekers of truth is based  on the unfailing trust in the power of the written word. Atlan is right: if you really want it,  writing can defeat  all obstacles, including death.

[3] Daily chart, “Turkey leads the world in jailed journalists”, in The Economist, January 16, 2019. Available at: https://www.economist.com/graphic-detail/2019/01/16/turkey-leads-the-world-in-jailed-journalists

[5] Commissioner for Human RIghts of the Council of Europe, “Memorandum on freedom of expression and media freedom in Turkey”, February 15, 2017. Available at: https://rm.coe.int/memorandum-on-freedom-of-expression-and-media-freedom-in-turkey/16806f1ae2

[7] Commissioner for Human RIghts of the Council of Europe, “Memorandum on freedom of expression and media freedom in Turkey”, February 15, 2017. Available at: https://rm.coe.int/memorandum-on-freedom-of-expression-and-media-freedom-in-turkey/16806f1ae2

[9] Reporters without borders, “Erol Önderoğlu acquitted at one trial, but another due soon”, July 19, 2019. Available at:  https://rsf.org/en/news/erol-onderoglu-acquitted-one-trial-another-due-soon

[12] The Stockholm Centre of Freedom, “Clampdown of foreign journalists in Turkey”, August 19, 2018. Available at: https://stockholmcf.org/clampdown-on-foreign-journalists-in-turkey/

[13] Carlotta Gall, “Syrian Activist and Her Daughter Are Fatally Stabbed in Turkey”, in The New York times, September 22, 2017. Available at: https://www.nytimes.com/2017/09/22/world/europe/turkey-syria-activist-journalist-murder.html