Arab Spring, Christian Winter. Coptic Christian Identity-Building in Egypt During the Uprising of 2011 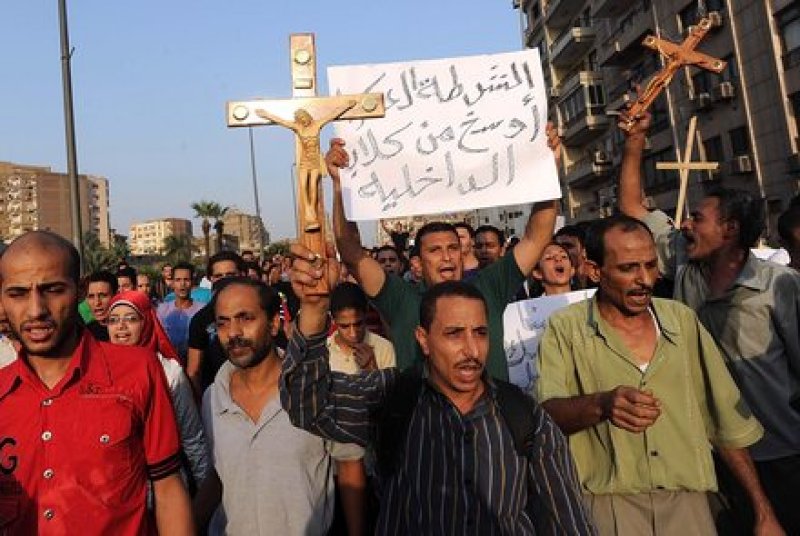 Arab Spring, Christian Winter. Coptic Christian Identity-Building in Egypt During the Uprising of 2011

In the West, the Arab Spring was often depicted a positive, democratic wave passing through the Arab world. The Arab Spring was then framed as a moment of hope, a rare opportunity to overthrow cruel dictatorships. In Egypt, eyes were aimed at Mubarak, ruling the country with an iron hand since 1982.

Years later, the Arab Spring turned into the Arab Winter, with the return of authoritarianism and Islamic extremism in the wake of the uprisings. This commentary argues that although the Arab Spring brought hope and expectations, for the Christians, Winter was coming.

Egypt officially recognizes only three religions: Islam, Christianity and Judaism. Other minority groups in the country, such as the Baha’i or Ahmadi, are not recognized and even face persecution[1]. In Egypt, the Christian population is the largest in absolute numbers in the Middle East and North African region. The majority of Christians in Egypt are Copts, in total around ten percent of the population, with estimations between 3 to 20 percent on a total population of around 97 million. The word ‘Copt’ (Qibtin Arabic) is derived from the Greek word Aegyptosor Egyptian, showing the Copts Egyptian roots. The word Qibtwas first used in the 9thcentury, two hundred years after the arrival of Arabs in Egypt. Before, Egyptian Christians were called the “inhabitants of the land” or “the people of the dhimma”.

The “Coptic question” is a sensitive topic in Egypt, already under colonial rule[2]where ethnicity and religion were used as means of divide and rule. Copts were, as non-Egyptians, largely excluded from daily interaction and challenges faced by Egypt’s masses under British occupation, while their status depended on the suppression of Arab nationalism[3]. However, the Copts identified themselves with the Egyptian nation that sought liberation from colonial rule. Throughout history, we can see the Copts siding with the Arabs, only to fall victim to violence against them after. For example, in the 1940s, the Copts supported the Arabs in the conflict with Israel[4]; however, the Copts often became victims of political abuse and physical assault when Arabs demonstrated violently against Jewish settlement in Palestine.

In the post-colonial era, the Egyptian state focused on an assimilationist discourse by spreading the myth of “national unity”[5]. Nasser weakened the Coptic elites by means of land reform, which made the Copts lose 75 per cent of their property[6]while strengthening the role of the Pope, Shenouda III, as the political representative and spokesmen of the Copts. Nasser did concessions to the Coptic Pope in exchange for political support.

With Sadat, a confrontational period had arrived for the Copts in Egypt. He angered the community by initiating a program of Islamization. Sadat declared that Islamic law was to be the principal source of legislation, a statement that made the Copts fear about their position in society that was consolidated by their long-term cooperation with president Nasser. In return, Pope Shenouda III decided to use a more confrontational style of politics. In the end, the Pope was placed under house arrest.

In 1985, the house arrest was lifted by Mubarak, which announced the start of a new phase of cooperation. As a response, Shenouda III changed his confrontational strategy into dialogue and communication. As with Nasser, Shenouda III again urged the Christian Copts to vote for Mubarak so in return, the Egyptian state would protect the Copts from sectarian violence. This phase of cooperation and mutual understanding was based on the presence of a common enemy: Islamist militancy. The Coptic elite has a tradition of leaning towards stability and not supporting Egypt’s political opposition since the security of the community lies in being close to the regime. With Sadat, this was different, since his Islamist politics itself jeopardized the security of the Copts.

Despite the relatively good relations between Shenouda III and Mubarak, Coptic Egyptian citizens were confronted with professional glass ceilings. Discrimination towards Copts in Egypt was widespread. But apart from this discrimination, the Mubarak regime preserved its support to the community only because of the fear of advancing Islamism. The Coptic community started to organize protests against discrimination in 2008[7]. However, that discrimination was almost completely denied in Egypt, even by some Coptic religious figures[8].

Still, Mubarak could not guarantee the security of the Coptic community after all. On New Year’s Eve 2010 – 2011, 21 Coptic Christians died following deadly attacks. The attack was evidence of systematic persecution: the Copts were a ‘beleaguered minority’[9]. This continuing danger forced the Pope to reduce his political support for president Mubarak. However, the entente between them persisted until the downfall of Mubarak.

In 2011, uprisings in Egypt against the Mubarak regime arose. The uprisings spawned from the Tunisian protests and the suicide by fire of Mohammed Bouazizi in Sidi Bouzid. The revolts were aimed at overthrowing the Mubarak regime, which was said to be a corrupt, dictatorial and repressive government. The protesters gathered on Tahrir Square for weeks. The Church discouraged the Copts to participate in the uprisings, considering the linkage with the Mubarak regime. Shenouda III stated in 2011 that “the things that are happening now are against God’s will”.However, a majority of Coptic Egyptians decided to join anyway. The discrimination that affects them in everyday life makes them feel as second-class citizens. These uprisings were seen as the moment to stand up for their rights and try to make a change in their position in Egyptian society. These events also accelerated an already existing wave of growing visibility and boosted a more vocal group of Coptic Christians in Egypt, urging for a ‘right to difference’[10], a new form of Coptic activism[11].

The revolution can thus be seen as a moment of unity in Egypt between Muslims and Christians where they agree and cooperate on the need for democratic reform. There are well-known examples of Christians protecting Muslims while they were praying during the uprisings, and the other way around. Many demonstrators proclaimed that this is ‘our democratic, secular revolution’, while even the spokesmen of the Muslim Brotherhood emphasized that it had been a revolution of “men and women, Muslims and Christians”. In this way, it is shown that it is possible to combine different identities in the same moment.

Unfortunately, the underlying tensions due to religious conversion, to the issue of intermarriage and to the building of new religious institutions still prevail. At the time of the revolution, despite the examples of unity as Egyptians, there were continuing identity clashes between Muslims and Copts. Tahrir Square was not only a place of protection of other religions, it was also the setting of continued attacks against Christians. For example, on January 30th, 2011, 11 Coptic Christians were murdered by Muslims in Southern Egypt; while on February 2ndCoptic Christians protected Muslim neighbors during prayers in the uprisings.  These two examples represent the challenging balance of holding different identities in a moment that forces someone to take a stand.

Maspero Square became an equivalent of Tahrir Square for specific Coptic grievances, following violence towards Christians. On 2011, October 9, Christian protesters were marching to denounce discrimination against Copts, after the demolition of a Church in Upper Egypt, getting together in front of the Maspero building. The day ended with clashes with the army, where in the end, 25 Copts were killed and more than 300 were injured. The Maspero attack was ground for conspiracy theories against the Copts in Egypt, picturing them as ‘traitors’, which stirred the divide in the Egypt national protest.

Before the elections in 2012, the Christian community had a fear of the Muslim Brotherhood. Their slogan “Islam is the solution” was not reassuring for other religious minorities[12]. The Coptic community remained hopeful that the uprisings would bring a change – and then Morsi, former member of the Muslim Brotherhood, came to power. During the elections, the Copts of course wanted to select a leader that would protect their rights; and a majority chose Shafiq. They were later accused of being anti-revolutionary traitors[13]. The united Egyptian identity shattered, and sectarian attacks continued to escalate without any governmental response.

On the 3rdof July 2013, Al-Sisi grabbed power and announced the end of Morsi’s rule. The Copts joined the demonstrations against Morsi in large numbers – again, without mobilization from the Church. The church urged to vote “yes” in the referendum on the constitution, because of fear for change. However, in the aftermath of the uprisings against Mubarak, the Copts expressed a cumulating dissent with the church policy. They saw that any return to the collaboration that existed under Mubarak and Shenouda III would have been harmful for the community. Hence, this moment of identifying as Egyptian more than as a member of the Coptic church, the commemoration of large scale attacks on the Christian community as well as the unity of Egyptian Muslims and Christians during the uprisings, changed the identity experience of members of the Coptic community.

After all, we cannot conclude that the Arab Spring brought a positive change for the position of the Christian community in Egypt. Still today, there are regular attacks on Coptic institutions and citizens in Egypt. This is why a large part of the Coptic community decided to flee the country. The feeling of unsafety, injustice and discrimination persists. An additional factor in the broader Middle Eastern context in the birth of the Islamic State, that on February 15, 2015, released a video of the beheading of 21 Coptic Christians, and is known for the ethnic cleansing in Syria and Iraq.

Since long, things were slowly moving in the Coptic community. However, the Arab Spring brought these events to the foreground, forcing individuals to speak out. The general feeling of hope and possibilities triggered the Copts in Egypt as well, allowing them to hope for a different future. The image of the ‘silent and homogeneous Coptic minority’ was contested, making room for an empowered group of confident young people.