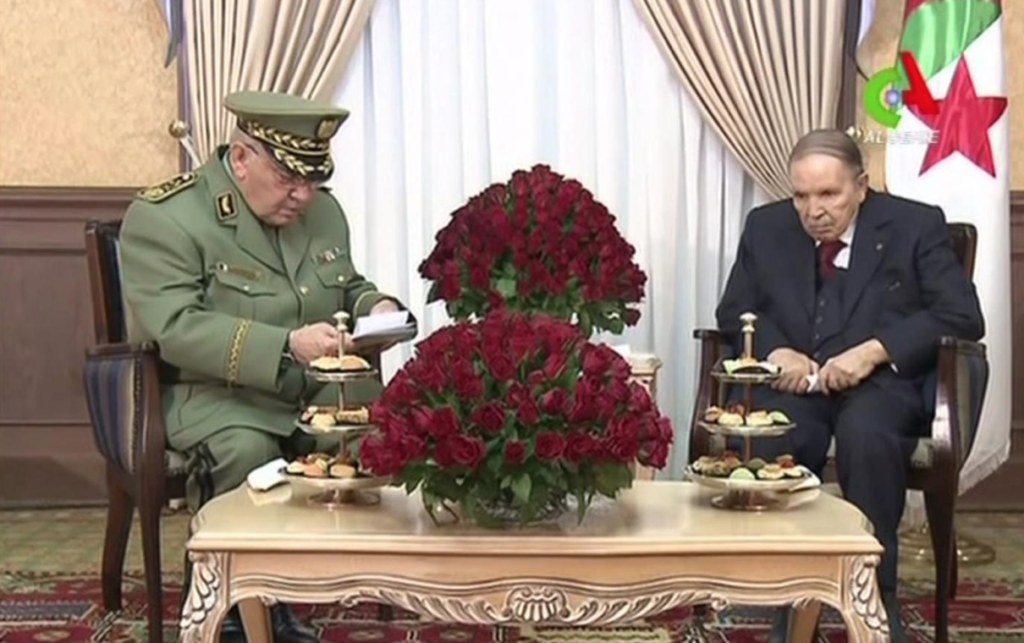 As in Tunisia and Egypt, Algeria’s armed forces appear to have calculated that their power will survive a leadership change.

On 26 March, Ahmed Gaid Salah, the commander of Algeria’s military, calledfor President Abdelaziz Bouteflika to be declared “unfit to rule”, a euphemism that he should step down.

In the face of ongoing protests, on 11 March, Bouteflika declared that he would drop his bid for a fifth term and delay presidential elections. The announcement was a victory for protesters, yet it was not enough to satisfy them, as they continued to rally in the streets.

Gaid Salah’s recent announcement, however, suggests that the military has sided with the protesters by abandoning the head of state.

The events in Algeria have invariably evoked comparison to the Arab Spring, which erupted eight years ago – raising questions as to whether Algeria’s security forces and military would resort to repression and a violent crackdown.

Algeria’s military is similar to the Tunisian and Egyptian armed forces, whose officers calculated that their power would remain intact even if the top leadership changed. Conversely, in Libya, Bahrain and Syria, military officers are drawn primarily from sectarian or tribal in-groups, and deployed violence in 2011 to defend their elite status against the perceived threat from protesters.

Algeria today, like Tunisia and Egypt in 2011, did not witness the deployment of its military against the protestors. What remains to be seen is how Algeria’s military will try to maintain its power in the face of continuing protests and an uncertain future.

Media coverage has questioned how Algeria’s army would handle the protests, as the spectre of Algeria’s brutal civil war in the nineties lurked in the background. Since then, protesters had been deterred by Algeria’s powerful security and intelligence forces. Yet, in the end, security forces – despite firing tear gas to disperse protesters – did not resort to repression this time around.

The answer to why the Algerian army did not use force, and ultimately abandoned Bouteflika, can be found by comparing its structure to civil-military relationsacross the region.

When the Arab Spring broke out in Tunisia in 2010-2011, the military refused to employ violence to disperse the protesters. The Egyptian military in January 2011 also refused to mobilise to dislodge the crowds from Tahrir Square.

In both cases, the structure of the officer corps of the armed forces and their recruits determined whether the military would opt to rally behind the elite or the people in a moment of crisis. When officers have a sense of a distinct corporate identity, they can calculate that the military’s power as an institution would remain intact, even if the top leader were to go.

The high-ranking officers of the Tunisian, Egyptian and Algerian armed forces could thus sacrifice their countries’ “presidents-for-life” – Zine El Abidine Ben Ali, Hosni Mubarak and Bouteflika – while not sacrificing the military itself.

Secondly, Tunisia, Egypt and Algeria are relatively homogenous societies, albeit with Berber populations in both Algeria and Tunisia and a small part of western Egypt. As a result, their armed forces are not divided by major tribal or sectarian cleavages.

Furthermore, if the ranks of the military are conscripted from homogenous societies, soldiers would have trouble shooting at protesters who they see as their fellow citizens. Therefore, the militaries in Tunisia, Egypt and Algeria could claim solidarity with the protesters, portraying themselves as the “people’s army”.

This was not the case in other Arab Spring states, such as Bahrain, Libya, Syria and even Yemen. When the Arab Spring spread to Libya, the higher echelons of Muammar Gaddafi’s armed forces, dominated by a coalition of Arab Sunni tribal in-groups from western Libya, sought to crush unrest in the eastern Benghazi area.

In Bahrain and Syria, the leadership of the armed forces was drawn primarily from one sectarian minority demographic, defending a sectarian elite against a perceived threat from the majority. In Syria, an Alawi elite mobilised fellow Alawis in the armed forces to quell what they saw as a “Sunni rebellion”, and in Bahrain, the Sunni elite did the same against the Shia majority.

The Yemeni case combines both tribal and sectarian cleavages, with its military collapsing altogether.

In the cases of Bahrain, Libya, Yemen and Syria, the armed forces in divided societies rallied behind the elite, with whom they shared a tribal or sectarian affiliation. They deployed violence against their societies, based on the calculation that their in-group status would be lost if the political system fell apart.

This calculation led to civil wars in Syria and Yemen, the collapse of Libya, and Bahrain inviting the Saudi military to crush protests, along with continuing repression in the Gulf island to this day.

Tunisia’s military was historically never as powerful as Algeria’s or Egypt’s, and thus did not hinder the nation’s transition to democracy.

The case of Egypt has been more illustrative of what happened with the Algerian military. The armed forces in Egypt in 2011 represented a deep state, an autonomous military institution separate from the executive, which managed to retain its power after Mubarak stepped down. Thus, it was the military, not the protesters, that forced his resignation.

The military governed Egypt between Mubarak’s removal and Mohamed Morsi’s inauguration in June 2012, and it was the military that eventually removed him in July 2013.

Algerians refer to their military deep state as le pouvoir, which also includes a network of wealthy oligarchs tied to the system. Thus, while the Algerian military did not use direct violence against its own people in the current protests, it undoubtedly seeks to exercise power behind the scenes to mitigate its losses and retain its network of privilege.

The media has declared that the protesters have achieved a “historic victory”, which was also true of the Egyptian protesters. The courage and persistence of the both the Egyptian and Algerian protesters in 2011 and 2019 was remarkable – yet the military elites in both states have also persisted, or will continue to do so in order to cling to power.